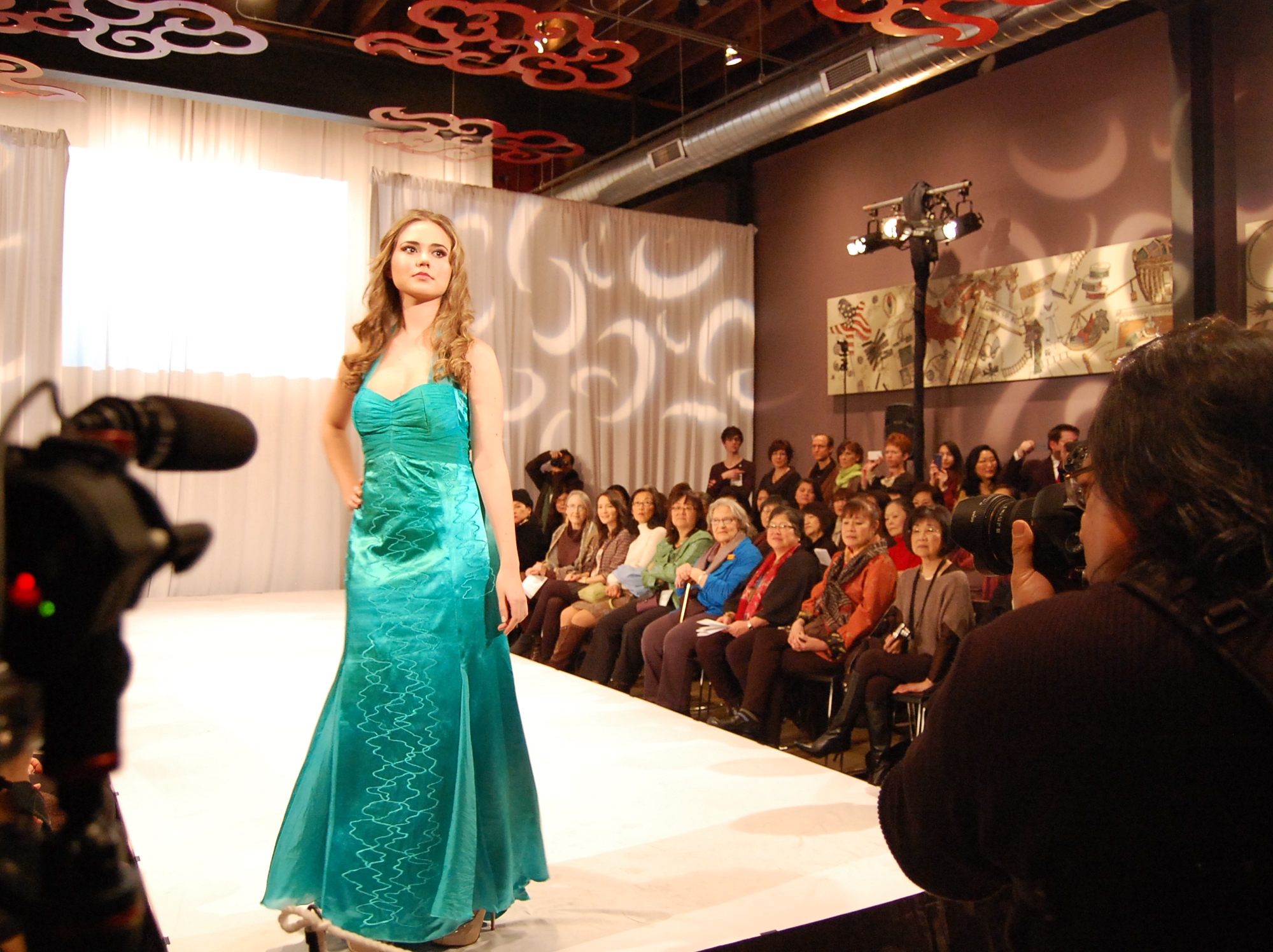 Fashion launched off at the Wing Luke Pacific Asian-American Museum with a fashion show last Saturday, commemorating the success of their newest exhibition, Fashion: Workroom to Runway.

Fashion devotees and photographers packed the community hall as they waited for the disc jockey to cue the runway show.

Attendees could hear heels clicking and supervisors giving instructions to the models behind the white curtain backdrop.

There was excitement in the air, and not even the front row observers made effort to hide their enthusiasm.

Sure, it was a presentation, but the fashion show was not a business occasion; it was a celebration of diversity and Asian-American pride.

“It’s about people getting together,” said Georgette, who was one of the front row spectators at the fashion show.

Fashion veteran Gei Chan commenced the fashion show by bringing back the zeitgeist of the 1970s flower power.

Audience members held their breath in nostalgia as Chan’s 1970 Gunne Sax apron dress walked by. It was innocent and reminiscent of bohemian rhapsody. Chan began working at Gunne Sax, a vintage women’s wear label, when she was 20 in 1970.

Chan constructed her fall 2013 Collection especially for the Wing’s fashion night out.

The Wing currently displays two of Chan’s works in the exhibit.

For Pop Soda, Peoples drew inspiration from Japanese street wear from the 1960-1970s, and from her childhood.

“As a kid, [I watched] old Kung Fu movies, [looked] through family photos from the 1960s and ’70s, and [enjoyed] the fun surprises that my dad [brought] back from his time in Korea and Japan while serving in the military,” said Peoples.

Asian culture has provided a great deal of inspiration for her recent collection. Even the details on a candy wrapper or scenes from old movies have influenced her work, she said.

“She takes in everything; she is a designing sponge,” said Terry Horlamus, director of the New York Fashion Academy in Seattle.

Designer Nin Truong of Maiden Noir, a Seattle-based menswear brand, ordered a Siberian invasion by sending in soldiers from his 2013 spring/summer Collection, which included a fleece hoodie, officer chinos, and moccasins.

Yan-Berrong’s collection took advantage of the feminine flower silk prints, which evoked 3-D textures due to the glittering sequins.

Yan-Berrong described the spirit of the Qipao as a symbol of female power, independence, and seduction.

Fashion: Workroom to Runway was organized to enlighten people that Asian-Americans have had an extensive relationship with the fashion industry.

The stack of C.C. Filson Co. buttons in the exhibit attests to the fact that Asian-Americans have been part of the growing garment business in the United States as early as the late 1800s.

The exhibit also exposes the demanding labor that goes into developing a collection in the style of a storyboard.

On one side of the gallery wall, one can peruse through sketches of the Regatta Line, which is the name of designer Banchong Douangphrachanh’s most recent clothing line.

On another side, visitors can enter a mock studio containing sewing machines and other various utensils.

“It is a career that requires great discipline,” said Exhibits Manager Michelle Kumata.

The exhibit honors the success of renowned Asian-American designers such as Naeem Khan and Trina Turk.

Fashion: Workroom to Runway also proudly holds the monarch ball gown from Luly Yang Couture, a black and white garden dress from Jason Wu (before Target discovered him), a Vera Wang cocktail dress composed of a moss-like fabric, and much more.

Other artists also got the opportunity to flaunt their creations on the catwalk, but exhibit organizers were not able to put all of the clothes in the actual gallery for display.

The fabulousness has not ended yet, Fashion: Workroom to Runway will stand until April 21 of this year. Visit wingluke.org for more information.

This story was originally published by The Thunderword.